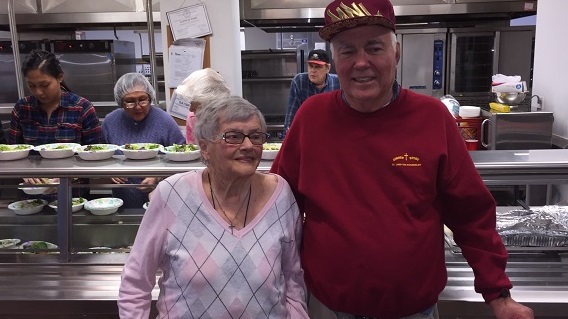 We lost a special man and a very dear friend in a tragic pedestrian accident on September 23rd. Bob Armbruster was hit by a truck while crossing the street near his home in Bergenfield, a walk he took nearly every day to get a cup of coffee and chat with friends and strangers alike.

Those of us fortunate enough to know Bob remember a selfless and extraordinarily kind person with a bright smile and hearty laugh who was always thinking of how he could help others. He was a passionate advocate for the homeless and worked tirelessly on behalf of homeless and hungry individuals, helping to ensure that a meal was served at our Walk-In Dinner Program every night of the year since its inception almost 28 years ago. Bob was at the first planning meeting for the program, which was simply an immediate, compassionate response to a need that had become apparent in the community. People were hungry and Bob was there to serve the first meal on March 1, 1991. He returned on March 1, 2016, with his group from St. John the Evangelist in Bergenfield, to serve in honor of the 25th anniversary of the Walk-In—having reserved that date well in advance!

Bob served on the Board of the Interreligious Fellowship for the Homeless (the predecessor of Family Promise) from 1990–1994 and was the Walk-In Dinner Chair from 1991–1994 and 2004–2005. He was instrumental in overseeing, coordinating, scheduling, and growing the Walk-In Dinner Program, expanding it further into the community each year. He singlehandedly brought a level of awareness about hunger and homelessness to hundreds of people and continued through the years to recruit new volunteers from St. John’s, as well as from many other congregations, businesses, and civic organizations around Bergen County. The program has served over 1.2 million meals and Bob’s contribution to its continuity cannot be overstated. Without his efforts it would not be what it is today. He both sustained and grew the program because no one could say no to Bob!

In 2016 Family Promise nominated Bob for a Russ Berrie “Making a Difference” Award because we considered him—and will always consider him—a true unsung hero. He cared deeply for the needs of others, and we honor him for his advocacy, his efforts, his vision, his leadership, and his dedication. Many years ago, the IRF awarded Bob a plaque that reads, “Always there— ready to do what needs to be done.” For how many of us can that be said? How many volunteers have shown the same level of commitment and passion for one cause for almost 30 years?

Let this be a call to action. Bob leaves huge shoes to fill and a legacy worth preserving. Bob made a vital difference during his lifetime and would encourage all of us to “do what needs to be done.” Please, in Bob’s memory, be an advocate, play a part, make a difference.