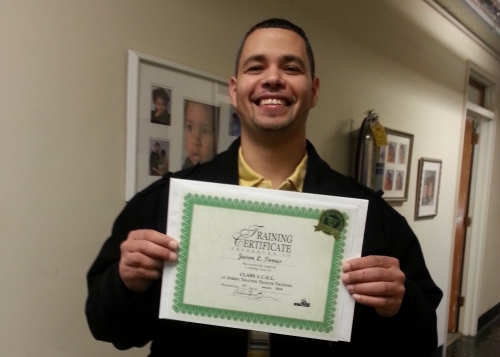 Jason, his wife and three children entered one of the New Leaf apartments at the end of October 2013. Having been laid off from his job several months earlier, Jason needed a plan. Working with our caseworkers, Jason started the research to find a new career path, one that he could build on for the future. After much research, Jason decided truck driving was the route he wanted to take and applied for a Break the Cycle scholarship.

The committee met with Jason and, being impressed with his vision and motivation, granted him the full cost of tuition to prepare for his Commercial Driver’s License (CDL) exam. He received the check on Dec. 24, 2013, and began the classes early in January 2014. By the end of the month, Jason passed the CDL exam, got his license and was offered jobs with the two highest rated trucking companies in the country. He accepted one of the positions and is currently in the company’s training program. Once training is completed, Jason will be earning about $50,000/year plus full benefits. With his determination and the support from Family Promise, Jason was able to “break the cycle” of homelessness and work towards a promising future for he and his family.