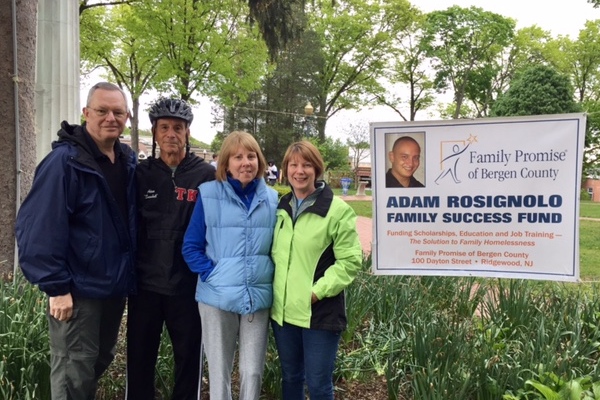 As a young child growing up in Bergen County, Adam Rosignolo wondered how anyone could be homeless or hungry and had a deep concern for those who were suffering in his community. But this remarkable child didn’t just wonder, he did something about it. At only age 14, Adam spearheaded the efforts of his church, St. Mark’s Episcopal Church in Teaneck, to help the homeless. He led a team from St. Mark’s in Family Promise’s cycling fundraising event, recruiting riders and soliciting pledges. His passionate appeals to his congregation made the event one of our most successful! But Adam didn’t stop there. For many years, he continued promoting the event, which later became known as the Hike or Bike. Adam also volunteered as an overnight host when St. Mark’s hosted the homeless men and women in the Overflow Shelter Program, and he cooked and served meals at the Walk-in Dinner Program, ensuring that his neighbors who were hungry had a hot meal.

Adam’s care and concern for those less fortunate continued into young adulthood. He volunteered with his fraternity and dreamed of joining the Marines. Unfortunately, Adam’s dream was not to be. His history of allergies and asthma made him ineligible. He was still figuring out his next steps when, tragically, Adam died in 2013 at the all-too-young age of 25.

In 2015, Adam’s parents, Steve and Beverly Rosignolo, who are passionate about helping homeless families get the training and jobs they need, created the Adam Rosignolo Family Success Fund to honor their beautiful son. One of the many families who have received support in Adam’s memory is Gloria* and her three young children. The Adam Rosignolo Family Success Fund made it possible for Gloria to enroll in a training program to obtain her Commercial Driver’s License, with the goal of becoming a commercial truck driver and having a stable career. Her dream is to eventually own and manage her own trucking company and give back to Family Promise. On Christmas Eve, Gloria passed the test and is well on her way to achieving her goal!  She and her children moved into one of Family Promise’s New Leaf Apartments just days before Thanksgiving and celebrated the holidays there – together and safe. Thanks to the Adam Rosignolo Family Success Fund, Gloria is breaking the cycle of homelessness and poverty for herself and her children, paving the way for a bright future for them all.

Since 2015, in Adam’s memory, the Rosignolo family has invested several hundred thousand dollars in Family Promise’s mission, including $200,000 of seed money to support our goal of acquiring a new building. This fall, the Rosignolos made another substantial donation to our Walk-in Dinner Program, continuing Adam’s wish that anyone who is hungry can get a nutritious meal, no questions asked.

“Our commitment to Family Promise of Bergen County comes from a strong belief in the work they do and in honoring our son Adam’s memory, which includes our drive from Florida for Hike for Hope. Its predecessor, Hike or Bike, was Adam’s favorite event!

Grief is personal and is worked through in many ways. Family Promise and Adam’s core belief in helping others have helped us move past his loss in some ways. We hope others find their way to help those less fortunate through support of Family Promise of Bergen County.”

Adam has touched countless lives already.  Thanks to Steve and Beverly and to the many friends who made donations in Adam’s memory, families and individuals for generations to come will be impacted by this young man’s loving, caring heart. Family Promise is honored and grateful to be a part of the legacy of Adam Nicholas Rosignolo.

*not her real name