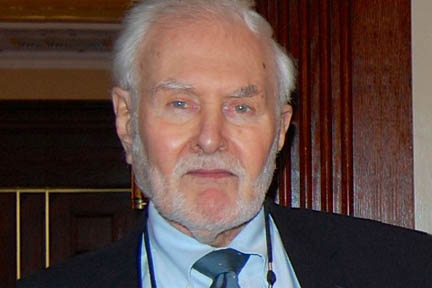 Ed Gormley spent many years working in the corporate world, but he calls his service with Family Promise of Bergen County “THE BEST JOB I HAVE EVER HAD”.  “What it pays in personal satisfaction to me,” he says, “is far greater than any paycheck I ever received in my professional working career.”

It all started strictly by chance. That was about two decades ago, when Ed volunteered to help shelter homeless people at St. Andrew’s Episcopal Church in Harrington Park. The church was part of the Interreligious Fellowship (the precursor of Family Promise of Bergen County), which took in those for whom the county social services department had no beds.

When Ed heard the IRF’s Jerry Leary speak at a St. Andrew’s volunteer dinner, he briefed Jerry on his professional experience “and asked if he could put me to work,’’ Ed recalls. “That was a Friday night. The following Monday morning I went to work for the IRF full time as a Staff Associate – a fancy title and job description for someone who did anything and everything that needed doing that no one else was able — or available — to do.’’

Over the course of his tenure Ed has served on the Board on both the PR/Marketing and Fund Development Committees. And even given his talents, fund-raising could be a challenge for Ed.
He recalls: “Jerry and I initiated the first IRF Raffle — for a Mercedes Benz. I clearly remember that, with only a few weeks to go before the drawing, we had not sold enough tickets to underwrite the cost of the car! Fortunately before we got around to cancelling the purchase of the car — and refunding the ticket costs to the purchasers — we sold enough tickets to make that unnecessary. But not for a very large profit, considering all the work we did.‘’

“It was my first lesson in the art of fund raising: We’re just another one of several thousand non-profits, unless and until we raise our profile substantially higher.”

Currently, Ed spends his time doing exactly that – raising awareness of poverty, homelessness and Family Promise to anyone who will listen.

Kate Duggan, executive director of Family Promise (and before that the IRF) says Ed’s self-deprecating sense of humor belies his enormous contributions. Despite his aforementioned misadventures in fundraising, she says, “he always kept at it. Tenacious is a good way to describe him. And loyal. And generous with his time, talent and treasure.’’