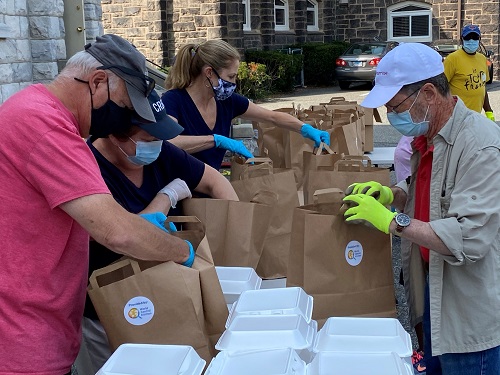 When we approached Fr. Herman of St. Cecilia’s Church in Englewood about using the church parking lot to distribute meals, we told him it was going to last for two weeks.  Secretly, we hoped World Central Kitchen’s commitment to us would be extended, but we never thought that when it began on May 11th, it would continue for 23 weeks!  During that time, we distributed 45,600 meals to families and individuals, many of whom lost their jobs because of the pandemic.    A total of 400 meals per day were purchased, principally from local Englewood restaurants.  In addition to feeding the community, these funds enabled the restaurants to stay open during the pandemic and retain their employees. The majority of the funding came from World Central Kitchen but in support of the program, Family Promise and its supporters added $28,000 to keep the program running longer.

We began distributing 15-pound boxes of produce on Friday, June 26th and continued every Friday until October 30.  We shared extra boxes with our community partners and, in the end, distributed 9,045 boxes, or 67.8 tons, of fresh vegetables and fruit.

Approximately 50 volunteers were needed each week to distribute meals and produce.  For many, this was the first time they had ever volunteered with Family Promise.  Many of the volunteers commented that, particularly during the pandemic, it was very important to them to be able to volunteer and feel like they were making a contribution to those most affected by the shutdown.

On the last day, many people thanked us and blessed us for being there to help them through this difficult time.  A woman named Judy brought us cookies.  Another woman delivered hand-written thank-you notes to the volunteers.  Many tears were shed – by our volunteers and those to whom we provided meals and produce.

Family Promise spun on a dime.  We’d never been involved in Englewood or any other place with a meal/produce program like this, but we have had 29+ years of experience feeding those who are hungry in Hackensack.  So, when we heard of the need we reached out to World Central Kitchen, and convinced them to support us.  And they did – to the tune of about $650,000!  We provided the boots on the ground.  But, more importantly, we provided the hearts and souls to carry this mission out.  Thanks to all who supported Family Promise.