Ferguson: a man for others 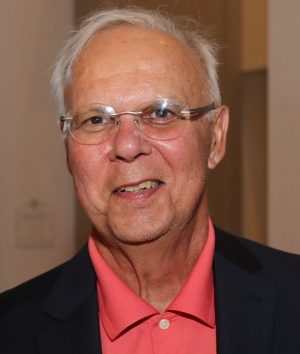 Harry Ferguson is what Pedro Arrupe, the superior general of the Jesuits, once called “a man for others.” The others, this spring, have been the homeless and hungry who face even greater misery in a time of plague.

Harry’s service with Family Promise of Bergen County actually dates to when the Interreligious Fellowship for the Homeless operated a shelter at St. Cecilia’s Church in Englewood. His own parish, Our Lady of the Visitation(OLV) in Paramus, was one of the supporting congregations.

When Family Promise emerged from the IRF in 2011, Harry and Visitation joined the network, whose members hosted homeless working families with kids for a week at a time. The parish at first supported Our Lady of Mercy in Park Ridge, and two years ago began hosting families at Visitation itself.

Harry deflects FP staffers’ praise: “One thing I am sure of is that without my team, specifically Kathy Emr, our OLV program would not be successful. The volunteers make it work.’’

Harry lost Linda, his wife and partner in good works, nine years ago. They lived for many decades in Paramus, where they raised four kids–two boys and two girls. Now Harry has 10 grandchildren and lives in River Vale.

On March 29, Visitation was one of the last groups to serve dinner at the county facility before it was closed, and its shelter residents transferred to motels because of the coronavirus.

FP had to scramble its feeding procedure–closing the dining room, handing out some meal packages at the door, and delivering others to where the shelter residents were now housed.

When Harry announced plans to join this effort, one of his sons “was kind of upset,” he recalls, given Harry’s age (75) and possible exposure. “I had to calm him down.” He’d wear a mask and gloves and keep his distance from others as much as possible.

Since then, he’s been volunteering two or three days a week, helping to package and assemble meals and hand them out to whomever shows up at the loading dock.

One day this month there was a familiar face–an older man whom Harry knew from volunteering at Eva’s Kitchen in Paterson. (Harry is the consummate volunteer–everything from a mission in Thailand to weekend eucharistic ministering at Valley Hospital.)

Now, he greeted the masked man like an old friend before handing him two bags containing supper. As the man walked off, Harry turned to a co-worker and gestured toward the departing figure: “Big Notre Dame fan.”