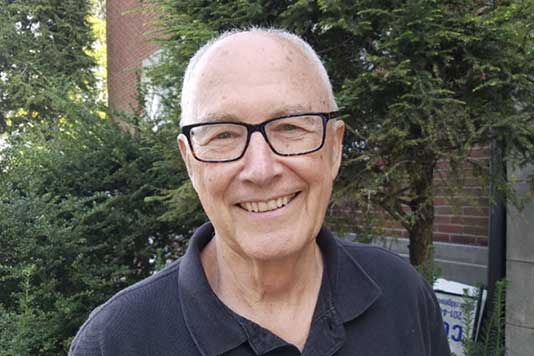 In many cases, “people give to a school out of loyalty, because they’ve gotten something from it, or because they’re getting their name on something,’’ he says. With Family Promise of Bergen County, he says, “they’re giving more out of the goodness of their heart. They’re giving to the cause. No one wants to see a family living in a car.’’

Dan spent decades in non-profit institutional development, first at Dwight-Englewood School and then at the consulting firm of Marts & Lundy, from which he recently retired. He’s brought that experience to the Family Promise board of directors.

“There’s a lot more competition for philanthropic dollars these days, so we have to scramble to raise the money we need to help families,’’ he says.

It’s those families – homeless working people with children – that made him a believer in the program 20 years ago, when it was still called the interreligious Fellowship for the Homeless.

He volunteered at the IRF’s shelter in Englewood with his church, Sacred Heart in Haworth. He joined the IRF board shortly after that. But when he joined Marts & Lundy in 2000, he had to travel more, and stepped down from the board with a promise to return when he left full-time work.

“And the day after I did,’’ he laughs, “I got a call from Paul Shackford and Kate Dugan’’ – Family Promise’s president and executive director, respectively.
Dan was born in Omaha, Neb. He’s a graduate of Drew University, and served on the school’s board of trustees. He also has a master’s degree from Syracuse. He and his wife Nora have lived for 24 years in Haworth, where they raised four children.

He says he’s looking forward to helping Family Promise navigate changes in what it means to be homeless.
“When unemployment was at 8 or 9 percent, more of the homeless were people with job skills who were temporarily out of work. Now that unemployment is down, the people we’re helping have different challenges. They need the skills to become self-sufficient.’’

He says he’s been inspired in this task by someone he met when he first volunteered 20 years ago – Nancy Woods, who headed the IRF and participated in its transition to Family Promise.