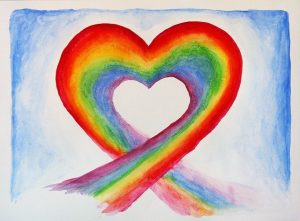 The day before the Sofa Soiree, Irene C. called the office and asked to speak with Nancy Woods.  Our Office Administrator, Renee Harper, gently told her that Nancy had passed away in June.  Tearfully, Irene described how Nancy had been an important part of her life.  In January 2002, the house she, her son’s father, and her infant, Keenan, were living in went into foreclosure and the family became homeless.

After spending their last dollar on a hotel room, the family learned of the Family Shelter at St. Cecilia’s Church in Englewood.  It was there that she met Nancy Woods–in Irene’s words, “the sweetest person ever!”  A week later, the baby’s father walked out and moved to Virginia.

Feeling abandoned and devastated, Irene would return to the shelter after work, do her chores, eat dinner, and go to bed.  She wouldn’t interact with anyone.  It was Nancy who convinced her that everything would be okay and, according to Irene, was “like a mother to me.”  Nancy often commented that Keenan was going to be a big boy.  Apparently, Nancy was correct.  Irene reports that Keenan is now 6 feet 6 inches and wears a size 15 shoe!

Irene was dedicated to give Keenan a home.  She worked hard, taking a bus to the babysitter at 5 am and then walking back to catch another bus that would take her to her job.  When Keenan turned one, Nancy surprised Irene with a donated car.  Eventually, she moved into an apartment of her own.  Nancy gave her the emotional support she needed and the organization supported her with grocery store gift cards and other supplies.

Irene now resides in Teaneck and has been living at the same residence for 16 years. Keenan graduated from Teaneck HS and is now a sophomore at Rider University with a double major in criminal justice and psychology.

Irene is grateful that during the pandemic, she still has her job with the company she has worked with for the past ten years.  Her goal now is to purchase her first home.  With the tenacity she has displayed, there is no doubt that Irene will make this dream come true!

Before hanging up, Irene said, “Thank you for being a part of this journey.  You guys don’t know how amazing you all are, and the families that you have and are helping through such a trying time.”  Thank you, Irene, for sharing your memories.