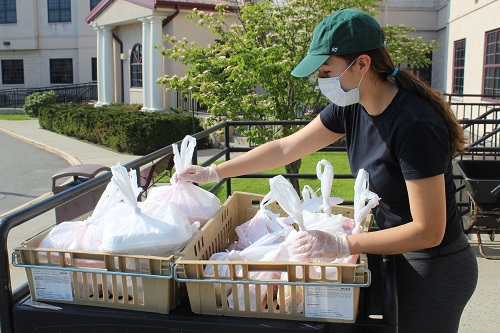 As part of COVID-19 relief efforts, Family Promise of Bergen County has been working with Chef José Andrés’ international nonprofit World Central Kitchen to provide free, ready-to-eat meals Monday through Saturday at the historic St. Cecilia’s Church in Englewood. Although the distribution program, which began on May 11, was initially scheduled to last only a couple of weeks, World Central Kitchen has extended its agreement multiple times after witnessing the community’s need for fresh, nutritious food and Family Promise’s commitment to distributing it to people who need it most. As of July 4, nearly 19,000 meals have been distributed!

In addition to providing to-go dinners, World Central Kitchen is now funding the distribution of 15-pound boxes of produce and dairy products to Englewood families once a week. These items come from farms in up-state New York and provide even more aid to families and individuals struggling with food insecurity in Bergen County. In just two weeks, Family Promise has distributed 7,200 pounds—3.6 TONS—of fresh produce!

Another benefit of providing the prepared meals to individuals and families in need, the program has also provided an income to local restaurants who have been impacted by New Jersey’s mandatory COVID-19 restrictions. Every week, two restaurant partners are chosen to provide 200 meals six days a week. With the new produce distribution program, the program is supporting farmers.

This effort has served as a way to connect community leaders and volunteers representing different organizations and religious congregations from throughout the area as they come together to support a common cause—helping to feed families in need in Bergen County.

“Englewood hasn’t had this type of community gathering and working together for at least the past two generations,” said the Rev. Bill Allport of St. Paul’s Episcopal Church in Englewood. But there is still much to do.

As President of the Board, Paul Shackford, said in a recent email, “One of the scabs this pandemic unpeeled is that food insecurity is a major issue in Bergen County. 70%+ of public school students in Englewood are entitled to free or low-cost lunches at school . . . we distribute 400 meals each day in Englewood, often in 20 minutes or less, and often turn people away when we run out . . . in two Fridays, we’ve distributed 3.6 tons of produce.”

It is going to take creative thinking to address the much bigger issue of food insecurity that was present before and which has been exacerbated by the pandemic. With our experience, Family Promise will be an important part of that conversation – and solution – to the issue that affects so many families.