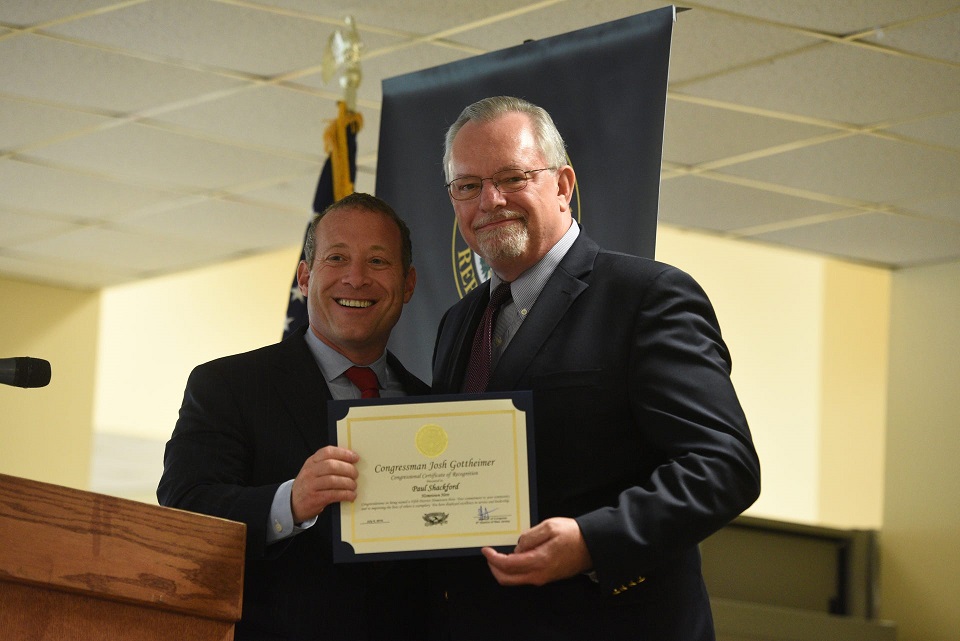 Board President Paul Shackford was named a Hometown Hero by Congressman Josh Gottheimer at a ceremony at Felician University in Lodi, on July 9, 2019. According to Congressman Gottheimer, this honor is bestowed on members of the community whose “dedication improves the lives of their neighbors, families, and all Jersey residents.” He went on to say, “We are lucky to have so many unsung heroes in our communities, whose quiet power of service goes on every day without the recognition they truly deserve”.

Paul was specifically cited for his work with Family Promise of Bergen County and bringing the idea of sheltering those experiencing homelessness to his congregation in Harrington Park. Thirty three years later, St. Andrew’s continues to provide overnight shelter, food and comfort to homeless working families under Paul’s guidance. Paul continues to serve as both the Host Congregation Coordinator and President of the Board of Trustees for Family Promise. From 2009 to 2012, he served as treasurer of the organization. Below is the short bio Congressman Gottheimer included in his presentation:

Paul Shackford, Harrington Park
For the past 33 years, Paul, by coordinating efforts at his church – St. Andrew’s Episcopal, has been an unstoppable force in alleviating homelessness in New Jersey. He has offered thousands of beds to the homeless in our community and has coordinated volunteers to ensure they’re fed and clothed. Paul has also worked to create the program All God’s Children, so that the families of special needs children, who may have difficulty sitting through a church service, have a special service designed to fit their needs.

Paul is credited for his involvement in many other projects in the community including the aforementioned All God’s Children Service, running the annual food drive and starting a farmers market in Harrington Park last year. “It is not just the positions he has held in these organizations but the passion that Paul brings to whatever he does. He is always available to help those less fortunate and is truly an unsung hero,” said Family Promise Executive Director, Kate Duggan.