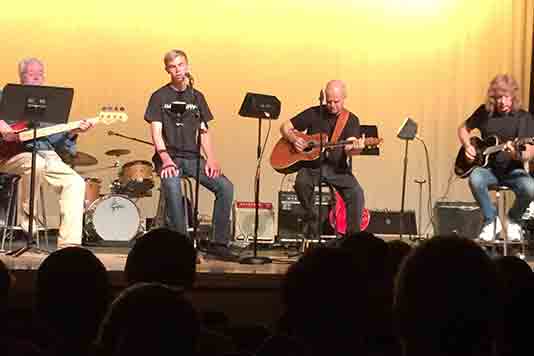 After participating in a Midnight Run, handing out clean socks and freshly made sandwiches to homeless people living on the streets of New York City, graduating senior, Jared Kullberg decided he wanted to do more. After hearing Board Member, Tom Flood speak at their congregation, Jared’s parents suggested he consider doing something for Family Promise. So Jared, a talented drummer and singer decided to put together a concert. He got permission to use the auditorium at Pascack Valley High School and with the help of family and friends spread the word through announcements, emails and social media. His friend, Josh Lantigua designed T-shirts and another friend, Maggie Capone added her vocals to the concert. Jared decided not to charge admission but dedicated the concert to Family Promise and asked for donations.

June 3rd was the big night. And what a night it was! Jared sang during one set and played the drums in the second. Fellow students, teachers and even Jared’s father, John performed as part of the band. In the end, 300+ people filled the entire center section of the large auditorium with more spilling out to the sides. The guests were treated to an evening featuring acoustic and electric classic rock, blues and country music. Click here for a sample of the evening’s music. In the end, the concert was a huge success. Between the sale of t-shirts, snacks and donations, Jared’s mission raised a total of $1,065.00 for Family Promise!

As Jared heads off to college in the fall to follow his passion for music, there is no doubt in our minds that he will be a huge success.
Click below to see highlights from the performance:
Music 1
Music 2
Photos