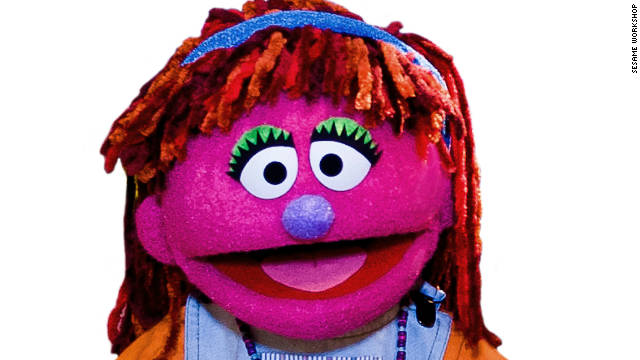 Lily is 7. She has bright pink skin, a blue nose and long pigtails. She’s a Muppet – and she’s homeless.

The Muppets have always reflected the range of emotions and situations in which America’s children have found themselves. And now, for the first time, one of the famed cast of puppet characters is homeless.

“Lily is the first Muppet whose storyline includes that she is experiencing homelessness,” says Sherrie Westin of Sesame Workshop (formerly Children’s Television Workshop), the nonprofit behind Sesame Street.

The goal, she says, is to reflect the fact that a growing number of kids in America lack homes to call their own.

Lily was introduced in 2011 as a character described as “food-insecure’’ because her family lacked consistent access to nutritious food.

But in new online videos, stories and resources, Sesame Workshop has expanded Lily’s storyline: her family has lost its apartment and now must stay with friends.

“This seemed like a really perfect extension of her story, so that we could use her to help children identify with,” Westin said in an interview with CNN. “Our hope is that we’re not only reaching the children who can identify with that Muppet, but that we’re also helping others to have greater empathy and understanding of the issue.”

She added: “We tend to think of homelessness as an adult issue, and don’t always look at it through the lens of a child. … We realize that Sesame has a unique ability to do that.’’

About 1 in 20 children younger than 6 experienced homelessness in 2014 to 2015, according to a report by the U.S. Administration for Children and Families. And during the 2013-14 school year, more than 1.3 million homeless children and youth were enrolled in public schools, according to the U.S. Department of Education.

Since Sesame Street went on the air in 1969, it’s established a reputation for inclusion with its characters.
In 2017, the program introduced a character named Julia, who has autism.

In 2002, Sesame Street in South Africa introduced Kami, a Muppet with HIV.