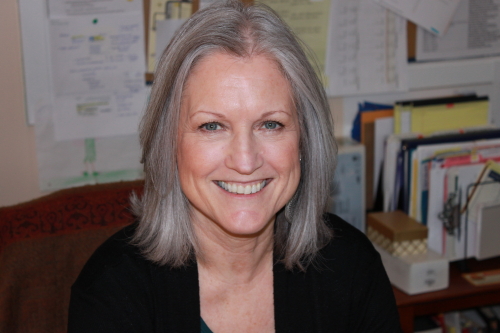 Trish Giglio is retiring after 16 years of helping the homeless working families with children that comprise the constituency of Family Promise of Bergen County. She says the job has been exciting, fulfilling, challenging–and better than bookkeeping.

That’s what Trish was doing before she decided to go back to school and earn a psychology degree at Ramapo College. After a stint at another nonprofit, she joined the Interreligious Fellowship for the Homeless–from which Family Promise would emerge in 2011–as a case manager in 2004.

She says she never regretted the shift from numbers to people: “I had gotten bored, so I decided to follow my heart and try to go in a direction that excited me. And I have never been bored!”

At Family Promise, Trish has worked primarily with families in the transitional New Leaf program, which shelters folks in apartments while helping them become self-sufficient.

Over the years, she says, she watched Family Promise change from what she describes as “more of a mom-and-pop operation” to a structured, professional organization: “The staff became a team over the years. There’s a sense that we’re all in this together. We know what each other is doing and we help each other.”

Trish, who grew up in the New York metro area and now lives in Ramsey, is the mother of two adult children, and one granddaughter. She also has six siblings.

She values her continued contacts with some of the families who have graduated from the program. “I found that what was most important for people were the internal changes, more than the external ones,” she says. “It was satisfying to see somebody really step into themselves and own their power and take responsibility for their own life.”