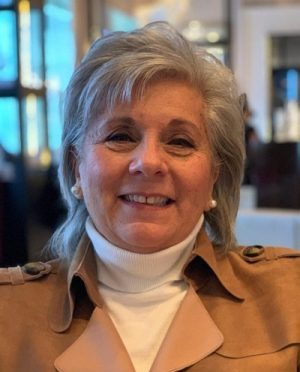 When Denyse DelDotto started volunteering at Family Promise in 2011, the organization was still coordinating its nightly Walk-in Dinner for the homeless, much as it had in the previous century. Volunteers were contacted and assignments were confirmed by phone or mail; someone in the FP office usually would type or write out a note, stick it in an envelope, affix a stamp, and mail it.   This struck Denyse, who’d just retired after working for years as a Montvale public school office administrator, as too quaint and too expensive. So, with the ready assent of Executive Director Kate Duggan and Director of Volunteers Margo Heller, she set out to obtain and electronically record scores of volunteers’ email addresses to create a database. Almost a decade later, the Walk-in Dinner calendar is fully digitized, and the 365-evenings-a-year feeding of up to 150 people at the county facility in Hackensack goes that much smoother.

When she first volunteered at Family Promise, “I just answered the phones,’’ Denyse recalls. After a day of that, she was eager for more of a challenge. And she was computer-savvy. After a while, “I saw that there was a way to make the Walk-in Dinner more efficient.’’

She’s seen the program’s volunteer army grow from 2011, when there weren’t enough volunteers to prepare and serve every night, to today, when Family Promise has so many groups eager to get on the calendar that some groups who serve on multiple nights have been asked to give up some dates to newcomers. Along with several other volunteers, Denyse still handles the Walk-in Dinner calendar. She says it’s meaningful work: “We live in Bergen County, which is so affluent. It’s shocking to see people who are working homeless, or who can’t afford their next meal.’’

Denyse and her husband, Reno, recently moved to Hillsdale, after living for several decades in River Vale, where they raised their three kids.

She’s glad she’s had a chance to help Family Promise, the only organization in Bergen County that focuses on the needs of homeless working families with children. “The people at Family Promise were very supportive when I suggested digitizing the volunteer list,” she recalls, “so I ran with it.”