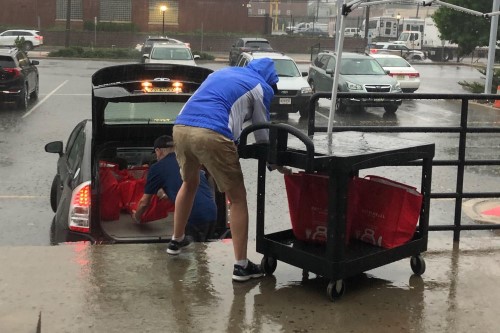 It’s time to celebrate an anniversary.  While we have served dinners for over 30 years in our Walk-In Dinner program (over 1.25 million meals!), this pandemic caused us to “spin on a dime” to address a new “normal.”  And we DID spin.  And now we have a new anniversary to celebrate—a new Two-Year Anniversary.

In March 2020, the pandemic struck.  Remember how none of us knew what to do . . . how dangerous was it?  The folks who run the shelter wisely began to move residents to motels so that they would be safe and, within a few weeks, the shelter was empty and all of the residents were in four motels.

Some thought that would end our dinner program, but we knew we would not do that.  From the time the first residents went into motels, we began delivering meals to them.  “Where’s the need?  We’ll be there,” we said.  And we never missed a night.

We moved from putting meals on plates to serve to people in the shelter’s dining room to putting the meals into to-go trays, into plastic bags, and driving to the motels to feed those in need.  We also handed out meals to anyone else who needed them, and who came to the shelter.

Remember the winter?  When we knew there would be too much snow to safely deliver the meals, and to give meals to those at the dock?  Well, we just delivered or handed out two meals one day so they had enough for two days.

We never missed a day.  Everyone who needed a meal . . . they got one.  And families got enough to feed everyone.

Kate and I remember driving 80 (90?) MPH on completely empty highways to deliver the meals during the shutdown.  To people in motels none of us ever knew even existed.  People opening their doors, asking if they could have a meal.  And our answer was ALWAYS “Of course you can.”  We have never said no.

And no questions asked.  Which is where Family Promise differs from nearly every other organization that provides meals.

Have we been scammed?  Given two meals to someone who said it was for a friend, when it was just for him?  Yes, of course we have, although it happens rarely.

We asked a good friend, an Episcopal priest, about this, about our occasionally being scammed.  And he said something that I will never forget.

And we do because all of us, all of our volunteers, know we want to be sure that all who need meals get them.  If we get “scammed,” well – that’s ok.

It’s the dedication, passion, and compassion of all our volunteers at the Walk-In Dinner program that makes all of this work.  We’ll give out 50,000 meals this year alone – over 100,000 since the pandemic began.

To all of you who volunteer at the shelter or who provide support to us – Thank You, and Happy Anniversary.

We do what others cannot.  Because of what YOU do.

And we all thank you for that.

Paul Shackford
President of the Board of Trustees