Weekend volunteers at the family center: the importance of being there 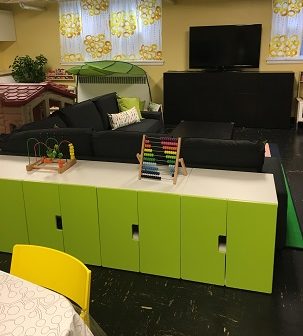 Most people who want to help others want to help others – actually do something for them or with them. Yet one group of Family Promise of Bergen County volunteers understands that helping can take the form of their simple presence – just being there.

Each weekend these volunteers staff the Family Center at Family Promise headquarters at the United Methodist Church of Ridgewood. In addition to being where families in the FP sheltering network come at the beginning and end of the work/school day, en route to or from the congregation where they’re staying, the center is also a place where families can spend their weekend days. But since the FP office is closed weekends, volunteers are needed to allow the Family Center to stay open.

Sometimes that means interaction — reading, playing, conversing or watching TV with the families. Sometimes, when the families are out doing what everyone else does on weekends, it means just sitting there, with your book, your knitting or your thoughts.

Regardless, that personal presence is invaluable. “We want all of the weekend volunteers to feel appreciated for their service,’’ says Margo Heller, FP director of volunteers. “That means both new recruits and old-timers.’’

Among the latter is Richard Chun. He enlisted in the last decade of the last century, with Family Promise’s predecessor, the Interreligious Fellowship for the Homeless. He was young and wanted to help people. So – this being the Dark Ages — he looked under “Charitable Organizations’’ in the Yellow Pages. He started volunteering weekends at the IRF facility at St. Cecilia’s Church in Englewood. He’s been doing it ever since, on the first Saturday morning of every month.

Why? For one thing, it’s something he can do: “It isn’t doing a whole lot, other than being there. But otherwise the families wouldn’t have a base on the weekend.’’ The families don’t have to be in the Family Center, but they know it’s there when and if they need it.

Over the years Richard’s job has gotten easier – he no longer has to cook breakfast, as at St. Cecelia’s — and harder – he now drives between Ridgewood and his home in Livingston (in Essex County), instead of between Englewood and his former home in Teaneck. But he still gets the same sense of satisfaction, especially when he can play with kids and give their parents a bit of a break.

That feeling is shared by Bob and Maureen Kelley of Ho Ho Kus, who volunteer on the second Saturday morning of each month. They also started at St. Cecilia’s, and also take a special appreciation in the kids in the program. (Maureen is a child psychologist.)

“We’ve always felt that we’re only a couple of steps away from being where the homeless are — an illness, a death in the family, whatever,’’ Bob says. “These people are not oddities. It could happen to anybody.’’

He has only one regret; when he occasionally arrives to find the center empty, “I wish I could be doing something.’’ But with his very presence, he already is.